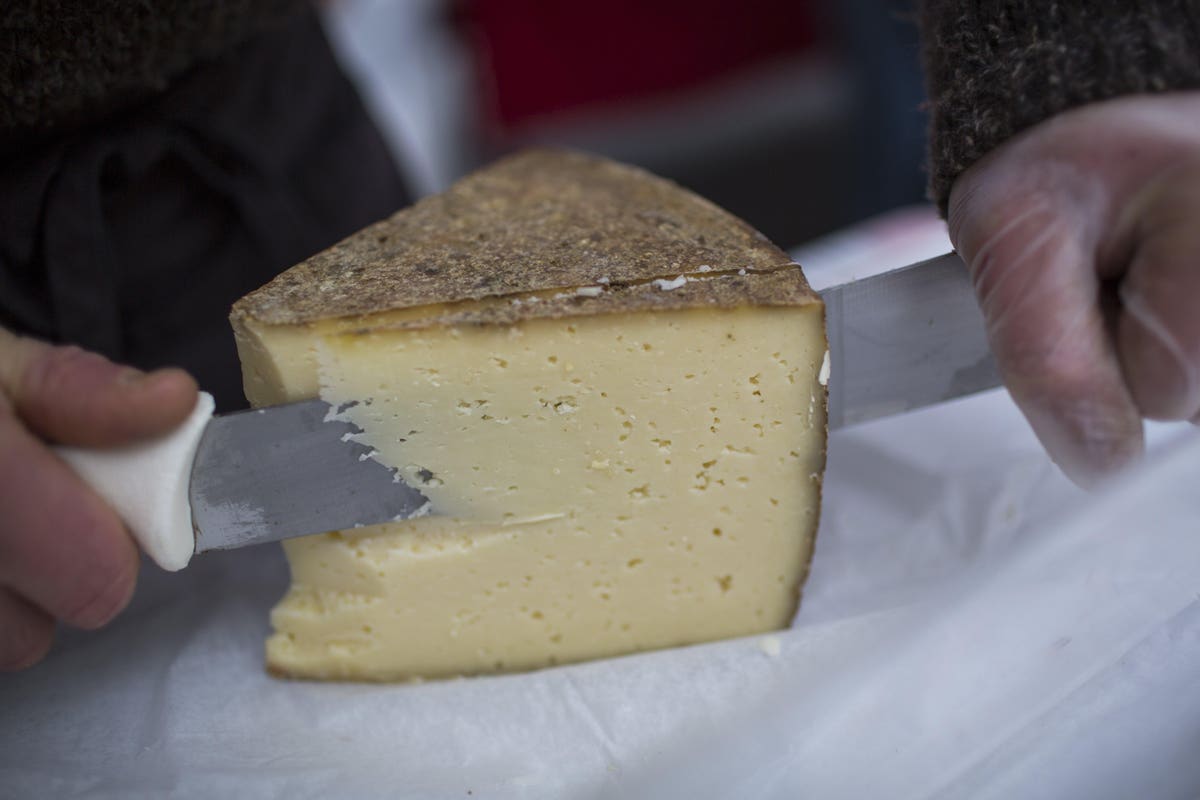 I had been worried there for a while. One great American cheese maker after another announced a sale, usually to a fine European company specializing in fine cheeses, but still. What happened to our food revolution and the emerging artisans who made them want to give up the goat?

Having turned sixty, with no interested children and no succession plan in place, work was getting harder and the market increasingly crowded and expensive. The first truly significant sale I noticed was that of that great American first lady of cheese, Laura Chenel at the Rains Group from France. It seemed to fit well. They had Epoisses and St. Maure and other award-winning and beloved French cheeses in their portfolio.

But the following years brought an unfortunate cleanup of the collection that left them lacking in flavor and appeal. Fortunately, this has been reversed.

Then there was Cyprus Grove, the makers of this crowd-pleasing Humbolt Fog two-tier goat cheese. This was followed by Redwood Hill, also Goat, then into the Cow with Cowgirl Creamery of Redhawk and Mt. Tam fame. These went to the Swiss center of master cheese makers Emmi. I know all of the American players personally and have respect and affection for each of them, so I paused before the concern set in.

Soon the seismic blow of the sale of The Vermont Creamery rocked the cheese world. Allison Hooper was more than a champion and a laureate. She has been an activist and role model for many good things in food today, especially in agriculture-friendly Vermont. Its sale to the Land O Lakes Co-operative made personal sense, but it scared the horses, or at least the cheesemakers in the best stores across the country. Would these little gems like Cremont or Bijou survive a Midwestern on-site? Spoiler alert. Yeah. They are always just delicious.

But a very strong sense of concern about the future of great cheese making and fine cheese management has manifested itself with the sale of Whole Foods to Amazon. I am quite opinionated on the subject. Although I have (and still occasionally still) hang out with WF, I have never found any top executives out there that are truly committed to anything other than premium pricing. That’s not to say that there haven’t been great people who have done great things on the team, but the take out alone has proven to me time and time again that they don’t know and didn’t really like good food.

For a time, the independence of cheese buyers from their store or region favored the retailing of some brilliant products. Then they started to consolidate and now those departments are thin ghosts of themselves – a sort of Hudson News edited collection of supposed top sellers designed to increase turnover, sales, and profits. What was once a place of discovery and opportunity has become an aptly named casket (that’s the industry term for that handy refrigerator) of special sale pre-cut pieces of mostly correct cheese. Sad.

So it was with great relief and enthusiasm that I reveled in the results of a recent American Cheese Society conference and judgment held in Richmond, Virginia last summer.

First, and fortunately, the beloved Laura Chenel The brand had obtained a new cheese maker and serious support for simple and significantly better offers. Standard bearer Laura Chenel Classic Medallion took first place in her fresh goat cheese medallion category, and other victories in various competitions – most notably at California’s State Fair where their new Ash Crust Buchette won the Best of Show awards, offer big promises. There appears to be a solid future for the American mother of cheese.

But the really happy surprise of the competition was in a relatively new development of refiners – those people who take care of and bring in good cheeses so that they can be sold at their best. Common in Europe, these people take young, well-made cheeses and age them to perfection – point (point) – as the French say. Here we’ve been fortunate to have a few smart people like Formaggio Kitchen in Cambridge, MA or Tomales Bay Foods in Marin County, Calif., But most of the time it’s take like take.

It turns out that there is a new sense of collaboration between cheesemakers and serious retailers that is paying off. The big, big prize (Best of Show) went to a cheese called Stockinghall, made at Old Chatham Creamery in New York in collaboration with and aged – and sold – by Murry’s Cheese of Greenwich Village and Kroger’s Fame. An incredible cheddar bound to the fabric, it’s cellar aged and in limited supply, but hey, it’s a major cheese.

The finalist or # 2 Best of Show went to another collaboration based at that same dairy, but this time with Cornell talents in concert with Wegman’s, a very smart and progressive, and again regional, grocery chain. Professor’s brie is a succulent little square of pure cheesy happiness.

And lest we fear that everything is done by the old creameries and grocery chains, the coveted Best of Show award for third place went to a young cheesemaker – 15 years old – from a creamery on the coast. central in California. Avery Jones, daughter of the highly respected Reggie Jones, and her delicious Alpine-style sheep’s milk cheese, Aries, is from their The shooting star creamery.

Per capita data from the US Department of Agriculture’s Economic Research Service cheese consumption has more than doubled in the 40 years between 1978 and 2018. This, even as plant-based foods are becoming all the rage. The explosion is certainly not entirely attributable to fine specialty cheeses, but they certainly opened the door and led the way. But not without challenges.

In his recently published book Ending the war on artisanal cheese by highly respected professor Dr Catherine Donnelly describes the many confusing and dubious missteps of various organizations that make no scientific sense, promote highly industrial methods, and undermine the fine quality and artisanal craftsmanship of traditional cheeses. It is worth reading for the serious student and cultural advocate (pun intended).

But the biggest and most inspiring news came right at the end of the year and the decade. In a competition held in Bergamo, Italy, in October 2019, where the Guild of Fine Foods is organizing it World cheese price, 3,804 cheeses from around the world, judged by 260 professionals, have established a tie between one of the greatest cheeses in history – Parmigiano Reggiano – and a soaked sheet wrapped in aged blue from a creamery in the ‘Oregon, United States. The eventual winner, chosen in a tie-breaker by the presiding judge, was announced as Rogue River Blue! Created eighteen years ago by David Gremmels after purchasing the Vella family’s dairy in Sonoma, Calif., This cheese has been a passion and work, love and hard work of cheese making, for enough years to win numerous awards in his home country. and abroad.

Having won the best blue cheese award at these early awards, the importance of winning the best. Cheese. In. The. World. cannot be overstated. It’s an incredible accomplishment for an American original that certainly equals the shocking victory in a blind wine competition forty years ago, often referred to as the Judgment of Paris where Californian wines beat their French competitors and forever changed the world of wine.

So I guess I can relax for the moment. It looks like artisanal cheese making is in good hands, at least for the next decade. And sometimes wrapped in a Syrah leaf soaked in pear alcohol as well.